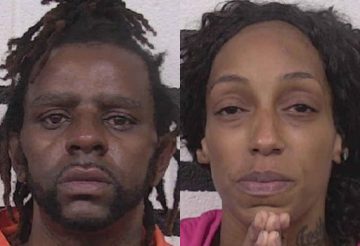 41-year-old Joshua Moore and 32-year-old Danielle Monique Jones, both of Winston-Salem, were arrested Wednesday by Lenoir Police. They’re each charged with felony counts of conspire to traffic opium or heroin, trafficking in methamphetamine, and possession with intent to manufacture, sell, and deliver marijuana.

Wednesday evening, members of the Lenoir Police Department Narcotics and Traffic Units, with assistance from the Caldwell County Sheriff’s Office ICE Unit executed a search warrant at a motel on Wilkesboro Boulevard. Officers learned through surveillance that Moore and Jones occupied a room that contained a substantial amount of narcotics.

Investigators found 30.6 grams of methamphetamine, 19.6 grams of heroin, 255 grams of marijuana, .2 grams of crack cocaine, prescription medication, one firearm and $3,360 in U.S. Currency. The total value of narcotics seized according to North Carolina Drug Guidelines was $18,430.

Moore and Jones are both being held in the Caldwell County Detention Center with secured bonds of $250,000 each. They were scheduled to make a court appearance today.