Alexander County Sheriff Chris Bowman said Friday that an autopsy has confirmed the identity of a man who died in a fire last week in Hiddentite.

31-year Jeffrey Lee Bebber was a resident of the mobile home destroyed by an early morning fire last Wednesday. 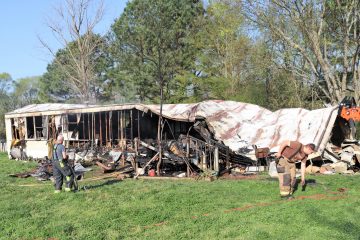 Hiddenite, Stony Point, and Taylorsville Fire Departments responded around 6am on April 7th. The structure was engulfed in flames.

Update: 4/12 at 2pm…Alexander County Fire Marshall Mark Earle stated today that his investigation has determined the fire to be accidental, no foul play is suspected. Earle said the fire was likely caused by one of three possibilities including the use of a kerosene heater, a propane lamp, or smoking by the victim. The dwelling did not have electricity at the time of the fire.