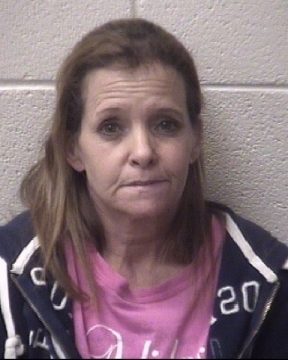 Rhonda Jean Teague, age 50 of Taylorsville was arrested Tuesday by the Alexander County Sheriff’s Office on a series of charges. Teague was charged with attempted breaking and entering, vandalism/damage to personal property, second-degree trespassing, possession of a controlled substance, possession of drug paraphernalia, and violation of the North Carolina stay-at-home order. Teague is being held in the Alexander County Detention Center under a secured bond of $5,000.

On Tuesday, April 21st around 8:48 pm deputies with the Alexander Co. Sheriff’s Office were dispatched to an address off of Stikeleather Rd. in the Hiddenite Community in reference to a reported Attempting Breaking and Entering into a residence. While enroute to the scene a suspect vehicle description was reported by the home owner. During the investigation deputies located a vehicle matching the description near Paynes Dairy Rd off of Millersville Rd. During the vehicle stop the driver was identified as Rhonda Jean Teague, age 50 of Taylorsville. Teagues description matched the description of the attempted breaking and entering suspect. Also during the stop she was observed attempting to conceal drug paraphernalia inside the vehicle. A further search of the vehicle lead to the discovery of a quantity of controlled substances and additional drug paraphernalia. Rhonda Jean Teague was arrested and charged with Attempted Breaking and Entering, Vandalism, Possession of a Controlled Substance, Possession of Drug Paraphernalia, Trespassing and for Violating the Executive Stay at Home Order. Her bond was set at $5,000.00 secured with her court date set for June 8th , 2020.