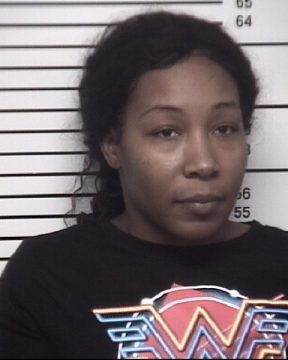 On Tuesday, May 5th, Deputies with the Iredell County Sheriff’s Office Interstate Criminal Enforcement (ICE) Team arrested, and charged Lashonda Davis, age 42 of Newark, New Jersey with Felony Trafficking of Schedule I Controlled Substance (Ecstasy) by Possession, and Felony Trafficking Schedule I Controlled Substance (Ecstasy) by Transportation. These charges are the result of a traffic stop on Interstate 77 in Northern Iredell County.

Deputies were working Interstate 77 when they conducted a traffic stop on a Mazda SUV for a traffic violation around the 63 Mile Marker. The deputies spoke with Davis and the male driver of the SUV. They told the deputies they were traveling from Georgia going back to New York.

The Deputies called for K-9 “Bosco” to come and assist with the stop. Bosco gave a positive indication for the odor of a controlled substance inside the vehicle. A search of the vehicle was conducted by the officers. They located five sandwich bags containing 5,002 dosage units of “Ecstasy” in pill form. The pills weighed over 1,500 grams or approximately 3.45 pounds. The street value of the Ecstasy pills, according to the North Carolina Department of Revenue Controlled Substance Tax, is over $25,000.

Davis is being held under a $500,000 secured bond in the Iredell County Detention Center.