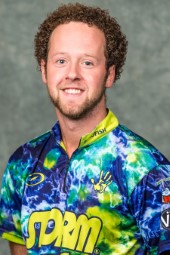 Simonsen, who was trying for his first win of the season, got off to an early lead with a 223-204 win in the first game of the title match, but Troup, rebounded in game two winning 237-210 to force a 9th and 10th frame roll-off for the deciding point.
In the roll-off, Simonsen posted a total of 39 pins, leaving a four pin in the ninth and a 10 pin in the 10th, giving Troup the opportunity to clinch the win.

Troup delivered with a strike in the ninth frame, followed by a spare knocking down the 4-pin, and a final strike that buried the pocket for a 40-39 win. “It was a quick turnaround from the time I bowled Kris Prather to Simonsen so I was trying to stay calm and present,“ said Troup. “You don’t expect a guy like Simonsen to miss and I knew I had to throw four really good shots to put up a score of 60 in the roll-off.”
Troup, who won the PBA Jonesboro Open and the PBA Doubles Championship with Jesper Svensson earlier this year, is the first player to win three titles this season and is well in contention for 2020 PBA Player of the Year honors.

“I’m still trying to make a run at Player of the Year,” said Troup. “My mindset is that I have to win everything that I bowl, but I know now I have a pretty good chance if I stay focused.”
The PBA Tour Finals, which featured nine hours of live coverage on CBS Sports Network over a two-day span at Bowlero Jupiter was filled with non-stop action and incredible moments. During the qualifying round of competition, seven-time tour winner Jakob Butturff bowled a perfect 300-game, the 28th televised 300 game in PBA history. “First word – amazing,” said Butturff about his perfect game. “I never thought I would do it so early in my career, let alone ever. It was definitely nerve-racking but incredible to be added to the PBA history books.”

The PBA Tour Finals featured the top eight PBA Tour players in points over a two-year span ending with the 2020 PBA World Championship. Points leader Jason Belmonte was unable to participate due to COVID-19 travel restrictions from Australia. Norm Duke as the 9th place finisher in points moved up to take his place in the field as the 8th seed. The eight finalists were split into two four-player groups with competition consisting of two rounds of total pinfall positioning rounds Saturday, followed by Sunday’s semifinal round for each group. The winner of each semifinal stepladder advanced to the title match. The final match of each stepladder also used the race-to-2-points format.

Troup advanced to the title match by beating three-time tour winner, Kris Prather in the Group 2 semifinal stepladder final 2-1. Prather won the first game 227-213, but Troup rallied in game 2 winning 257-232 to force a 9th and 10th frame roll-off which was won by Troup, 60-49.