Statesville High running back Chavion Smith has verbally committed to the Charlotte 49ers. 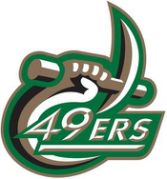 Smith entertained a number of scholarship offers, including SEC programs Tennessee and Kentucky, before ultimately picking the 49ers. Smith was injured in the fifth game last year against Concord and missed the remainder of his junior season. The knee injury has been rehabilitated.

Smith was held to only 50 yards in the Statesville win over Alexander Central last September.