Pfeiffer University senior softball player Vada Blue Sherrill has been named to the 2019 Schutt Sports/NFCA Division III National Player of the of the Year Watch List the organization announced today. 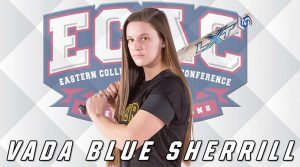 Sherrill, a senior from Hiddenite, N.C., returns after earning First Team plaudits at shortstop after an outstanding junior campaign. Sherrill finished the 2018 season with a .508 batting average and went a perfect 56-for-56 in stolen bases. In her 42 games, Sherrill clubbed 16 home runs, drove in 69 runs and scored 64 times, all were program records. Additionally, Sherrill set the single-season team record for on-base percentage (.593) and slugging percentage (.992) to lead the Falcons the ECAC Championship in their first year in Division III. Sherrill was also tabbed an NFCA Second Team All-American.

Sherrill joins 10 other players that received NFCA Second Team All-America honors from last season and is among 25 seniors that appear on the initial watch list this season.

She is also the only USA South player selected to the list and one of only two from North Carolina.

The list is compiled annually by the NFCA’s Division III All-America committee and will subsequently be cut to 25 and 10 players throughout the season. The winner will then be chosen among 10 candidates following the NCAA Division III Championship.