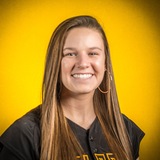 Misenheimer, N.C. (May 15, 2019) – Pfeiffer University senior softball player Vada Blue Sherrill has been tabbed as a contender for the 2019 Schutt Sports/NFCA National Player of the Year.

Sherrill, an Alexander Central product from Hiddenite, N.C., completed her Pfeiffer career in style, helping the Falcons claim back-to-back ECAC Championships last weekend with a 9-1 win at Penn State-Behrend. Pfeiffer finished the year with an overall record of 36-7.

The watch list is compiled annually by the NFCA’s Division III All-America committee and will subsequently be cut to 25 and 10 players throughout the season. The winner will then be chosen among 10 candidates following the NCAA Division III Championship.