Football recruiting is a passion for some dedicated fans, for the casual fan it’s something you don’t think much about . An Alexander Central member of the class of 2021 is thinking about recruiting a lot. 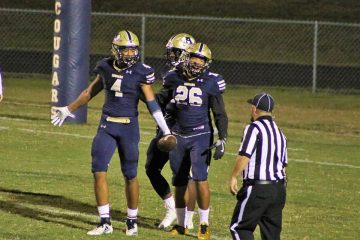 Ryheem ends up with the ball !
Photo: Gary Herman

Ryheem Craig burst into the spotlight during his junior season with the Cougars. He emerged as one of the area’s most disruptive forces on defense. Craig started for the Blue and Gold as a sophomore and showed some flashes, in 2019 it turned into an explosion.

The 6’3, 205 pound defensive end spent a great deal of this past season in opposing backfields. He collected 89 tackles including 21.5 tackles for loss in 2019. Craig started to harness what coach Butch Carter called potential , into reality. At times, Craig was the one player on the field everybody watched, how could you miss him ?

Those Friday night performances have turned into a frenzy of attention from college recruiters. Craig has received offers from ACC schools like Lousiville and Boston College. Offers from the Big 10 include Illinois, Minnesota, and Maryland. Southeastern Conference member Tennessee has offered as well. It doesn’t end there. Appalachian State, East Carolina, Charlotte, Temple, among other schools are interested and have made offers too. The list will continue to grow, as it should.

Coach Carter said Tuesday, “We’re so proud of Ryheem, he made so much progress this past season, I’m thrilled for him that he’s getting the attention.” Carter says “he got serious about the game this past season including making progress in the classroom and in the role as a leader.”

Keep an eye on #4 this fall, college football recruiters are !