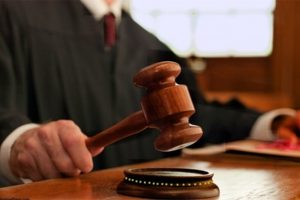 Court proceedings have been postponed a second time, this time through May.
Chief Justice Cheri Beasley issued an order Thursday that will postpone court proceedings until June 2, according to a release from the North Carolina Administrative Office of the Courts.

Under the order, deadlines for most payments and fees will be extended by 90 days, and clerks of court have been ordered not to report failures to pay court debt to the DMV, the release said.
“We want people to know that they do not need to come to the courthouse right now to pay a traffic ticket,” said the Chief Justice. “Deadlines for those payments have been extended and licenses will not be suspended until this emergency passes. We want people staying at home and staying safe.”
Clerks of court also are being instructed to post notices at courthouses discouraging those infected with COVID-19 from entering the courthouse, and the order authorizes court proceedings can be conducted by remote audio and video transmissions, the release said.

Beasley’s order also directs attorneys and others without business before the court to avoid court facilities, allows the use of sworn statements under penalty of perjury instead of notarization for court filings and oaths, and allows service of court documents by email, the release said.
“Judicial officials and court personnel statewide are going above and beyond to serve the public during this health emergency,” Beasley said. “My number one priority is to protect them and the public by limiting gatherings and foot traffic in our county courthouses, while making sure our courts stay available to serve the public.”

Courts are being directed to maintain social distancing practices as much as possible, and to make court functions remotely available to customers if possible.
This isn’t the first change the judicial system has made to help prevent the spread of COVID-19. Other actions include:

» Two emergency directives issued March 13 that postponed most cases in superior and district courts for 30 days and instructed local officials to take steps to limit the risk of exposure in courthouses
» A memo issued March 15 that allowed for the public and court personnel to practice social distancing and other preventative measures recommended by the North Carolina Department of Health and Human Services and the Center for Disease Control
» An additional emergency step on March 19 when Beasley issued an order that extended deadlines in the trial courts until April 17, 2020
» A March 27 order by the Supreme Court of North Carolina that extended all appellate court deadlines for 60 days

The judicial branch will be providing continuously updated information on its website at www.nccourts.gov, the release said. Some court business can be completed online, like paying a ticket, court payments, signing up for court date notifications and reminders and eFiling court documents for certain courts and case types.