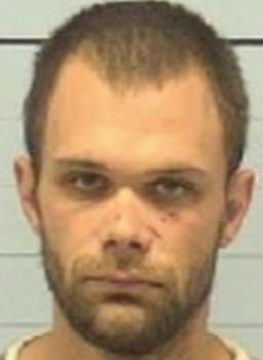 24-year-old Randall Kent Brank of Morganton was arrested Tuesday by Burke County Sheriff’s Deputies. He’s charged with felony counts of second-degree kidnapping and possession of a firearm by a felon. In addition, Brank is charged with misdemeanor counts of assault on a female, damage to personal property, and communicating threats.

Tuesday at approximately 8:00 p.m., Burke County Deputies responded to an address on Piney Road to conduct a welfare check on a woman at the residence. Deputies were told that she was possibly being held against her will with a gun or knife by her boyfriend, Randall Kent Brank. When Deputies arrived, they attempted to make contact with both parties, but were unsuccessful.

Working with Brank’s mother, who lives on the property, she also attempted to talk to Brank. After approximately an hour, Brank and the woman exited the front door of the residence. Brank was detained and upon further investigation, Deputies determined that the woman had been held against her will at gunpoint and had been threatened to remain quiet. She had visible marks from an apparent assault.

Officers found a handgun hidden in a closet. Brank was arrested and placed in the Burke County Jail. His bond is $75,000 secured on the kidnapping, weapon and assault charges, and he’s on a 48-hour-hold on the other charges.