Catawba County Sheriff Deputies responded to a report of a person shooting into multiple residences and vehicles in the 4800 block of Old Catawba Road this morning. 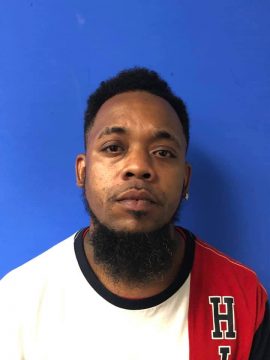 Eyewitnesses reported 35-year old Antwan Boyd struck two separate residences and three separate vehicles with gunfire. This shooting allegedly stemmed from an ongoing domestic dispute between Boyd, a woman he shares children with and that woman’s boyfriend. During the incident, it is alleged that the boyfriend returned gun fire. A crime scene investigation at the residences on Old Catawba Rd confirms at least 15 rounds fired between the two shooters.

Boyd, a Catawba County resident, was located at a residence on Pioneer Dr in Newton and taken into custody without incident. A 9 millimeter carbine style semiautomatic rifle was located and seized. That rifle is believed to be the weapon Boyd fired on Old Catawba Rd. A search of Boyd’s vehicle confirmed it had been struck by gun fire multiple times.

Boyd has been charged with two (2) counts of Shooting into an Occupied Dwelling, Assault with a Deadly Weapon, Possession of a Firearm by Felon and three (3) counts of Injury to Personal Property. Boyd was issued a $25,000 secured bond for the Firearm by Felon charge and No bond on the other charges as they have been deemed to be domestic related. Boyd will have a first appearance in Catawba County District Court on Wednesday.

No charges against the second shooter have been filed at this time.