Lenoir-Rhyne University’s Jaquan Artis has been selected as the 2019-20 South Atlantic Conference Athletes of the Year, the conference announced on Wednesday (June 17). The Male and Female Athlete of the Year awards are selected by a vote of the league’s athletic directors. 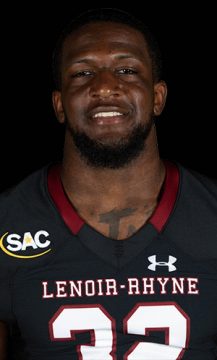 Artis, a senior defensive end from Kingston, N.C., was named the D2CCA Super Region Two Defensive Player of the Year and helped Lenoir-Rhyne to a 13-1 mark as the Bears advanced to the NCAA Division II quarterfinals. He was a finalist for both the Harlon Hill Trophy and Gene Upshaw Award closing his senior campaign with 82 tackles with 23 stops for loss and 14.5 sacks. Artis was just the second Bear to be up for the Harlon Hill Trophy, most prestigious individual award in Division II, and the first since Leonard Davis was named a finalist in 1994. He was also the only defensive player selected as a finalist.

The 2019 South Atlantic Conference Defensive Player of the Year and consensus All-American, finished his collegiate career with a staggering 47.5 tackles for loss and 29 sacks.