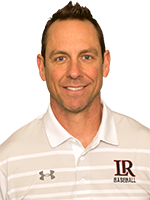 Tom Fleenor has been fired after six seasons as the Lenoir-Rhyne head baseball coach.

The university announced the decision Wednesday morning. Fleenor guided the program to a 150-136 record, which included a 59-91 mark in South Atlantic Conference play. The Bears finished 23-27 this season (7-17 SAC) and missed the conference tournament after tying for eighth in the league standings.

The decision comes less than two weeks after the university confirmed Fleenor had been placed on paid administrative leave pending an internal investigation. Fleenor missed the final eight games of the season.