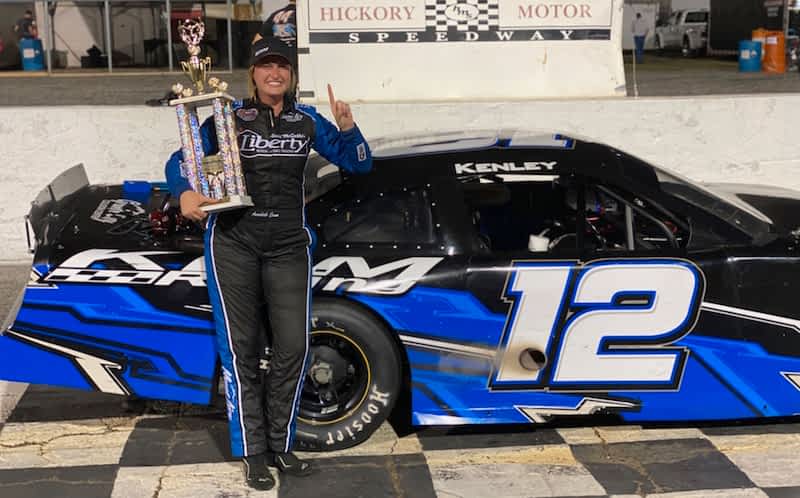 For only the second time in the storied history of “America’s Most Famous Short Track,” a female racer won a Late Model race Saturday night at Hickory Motor Speedway. Annabeth Barnes Crum of Hiddenite, North Carolina took over the lead on a restart with 12 laps remaining and pulled away in the closing laps to win the night’s second Late Model Twin 40.

With the win, Crum became the first female to win a Late Model race at the track since Chrissy Wallace won in 2007.

For much of the 40-lap feature, it was a game of survival for drivers battling at the front. Mike Looney, Shane Lee, Thomas Beane, Vincent Midas, Mason Diaz and Mason Ludwig all took their turns at the front of the field before various incidents took them out of contention.Crum, who started eighth in the race, avoided trouble early in the race and put herself in a position to pounce for the lead on the night’s final restart.”We definitely didn’t get it easy,” Crum said on the Speed51 broadcast. “We started eighth, which we were pretty bummed about because it’s so important where you start here. I don’t think we had the best car here, I think the 24 (Diaz) did but I drove my ass off. This team gave me such a good car. We’ve been running good all day and we’ve been working on this for a long time, getting better and better every week. We finally put it all together today.”

For Crum, the win was bittersweet as her husband Jake Crum stayed at home Saturday night to take care of their kids. While she was thrilled to finally score an elusive Late Model win at Hickory, she was sad that her family wasn’t able to be there to celebrate with her. “He’s probably in the bed with the kids right now. Damn, I wish my kids were here,” Crum said while fighting back tears. “I know they were watching the first one. I’m just so grateful to have a really good husband with my kids right now. I wish they were here and it really makes me sad, but I got a really great team and a really great sponsor.”

With a win under her belt and the monkey off her back, Crum is more motivated to return to victory lane on a night when her family can be with her to celebrate. “I want to do it again with them here. I know my mom hates that she’s missing this and Jake, too,” she stated. “It bums me out that they couldn’t be here to celebrate with us. I know my dad, he’s the best crew chief, the best dad in the world. We’ve had some tough years in racing and he never gave up on me even when I kind of wanted to give up on myself. I’m really really proud. This is really an unbelievable feeling right now.”

Earlier in the night, ARCA Menards Series competitor Mason Diaz also broke through for his first career Late Model victory at Hickory Motor Speedway. Starting from the pole position in the first Twin 40, Diaz jumped out to a comfortable lead and never looked back from there. “We have a lot of seconds here. Between [team owner] Mike (Darne) and I, we probably have over 50 second-place finishes here,” Diaz said. “To finally get the one, hopefully that means there’s a lot more coming. I was trying my best to save throughout the race and get to a safe medium away from everyone. Thankfully, we were able to. Mike Darne got this Toyota Camry dialed in for tonight.”

With an invert of 10 for the second race, Diaz was faced with the tough challenge of racing to the front of the field. After an early incident involving Shane Lee and defending track champion Thomas Beane while racing for the lead, Diaz found himself in striking distance on a Lap 12 restart. Seven laps later, after Vincent Midas took over the lead, Diaz made his bid for the top spot. As Diaz went to make his move on the inside, the two cars collided, sending Midas for a spin. Diaz was penalized by race control for his role in the incident.

That incident set up a thrilling three-way battle for the lead between Mike Looney, Mason Ludwig and Shane Lee. After a few laps of hard racing, the battle came to a screeching halt on Lap 27 as the three drivers were three-wide off of turn two. Contact between Lee and Ludwig sent Ludwig up into Looney off of turn two, resulting in Looney spinning in front of the field. Lee and Looney both retired from the race with damage following the incident, while Ludwig inherited the lead.

After avoiding the incident at the front, Crum lined up on the front row and took over the lead from Ludwig on the ensuing restart. In the closing laps, Diaz took over the runner-up position after a spirited battle with Ludwig.