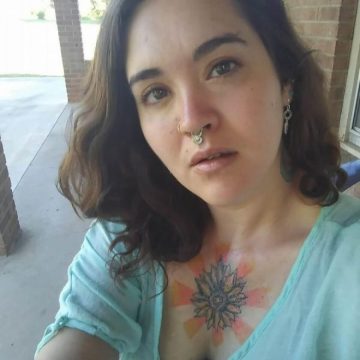 28-year-old Summer Hope Eckert of Hickory has been reported missing by her friends and family. A Silver Alert had previously been issued for Ms. Eckert on June 27 and she was reportedly found a short time later; however, she has not been seen since June 30. She has been without her medication since leaving and could be endangered.

Ms. Eckert is a white female. She is 5’3″ tall and weighs 215 pounds. She has brown eyes and brown hair. Ms. Eckert has a nose ring and several tattoos, including a flower in the center of her chest and an eternal life symbol on her neck. She wears dark-framed glasses at times. Ms. Eckert has a below-the-lip piercing, a nose bullring, and several piercings in both ears. At last report, she had her guitar and guitar case with her and may have a dark-colored book bag or duffel bag.

Ms. Eckert was last seen on June 30 at a friend’s home in Horse Cave, Kentucky. She is either hitchhiking or catching rides at truck stops. Her wallet was found on July 1 in the trucker’s parking lot at the Solar Farm Welcome Center in Stanton, Tennessee.

According to friends and family, Ms. Eckert has an affinity for all things Native American and is educated in Native American heritage. She may have been making her way to Oklahoma. She also has some attraction to Arizona and could have been trying to make her way there.