Following the pandemic shortened 2020 CVCC baseball season, Red Hawks assistant baseball coach Chandler Jenkins has chosen to move on from baseball, which left an opening for an offensive coach.

“From the beginning, I had coach Lackey in mind,” Rozzelle said. “Coach Jenkins did an unbelievable job and set the bar really high for what is expected out of our assistants, and I knew Brian fit that perfectly. I have followed him closely through the years at St. Andrews as well as Alexander Central and Watauga high schools and have always been impressed with his love for the game and the importance he places on the relationships with his players.” 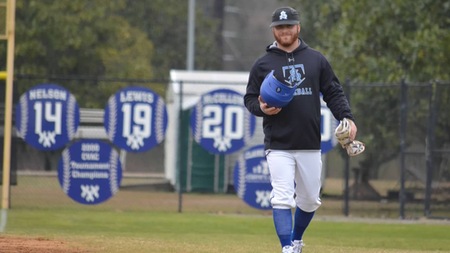 “I have watched him help those great programs and knew that his passion would be a huge addition for us,” Rozzelle said.

Getting him to CVCC wasn’t going to be easy considering his new wife Allison would have to uproot her life to follow her husband’s dreams.

With family always being a point of emphasis for the Catawba Valley baseball program, Rozzelle insisted that Allison be a part of Brian’s interview process.

“(Associate head coach) Kris (Harvey) and I interviewed Brian individually two Saturdays ago and then the following Saturday I invited Brian back with Allison for a cookout at our house so she could meet my wife Cayley and Kris’ wife Caroline to just get a feel for us,” Rozzelle said. “I wanted Allison to know that we were recruiting her just as much as we were Brian.”

That move did not go unnoticed by Brian.

“It means a lot to me that coach Rozzelle included my wife in the decision-making process,” Brian said. “The fact that he understands that she’s moving further from her family and that it’s important for this to be the right fit for her as well tells me how important family is to him. That’s a big deal to me. Being a coach’s wife isn’t an easy task. She continues to support me and pushes me to chase my passion. I could never thank her enough for that support and for being with me on this journey.”

Lackey, who also played baseball at Alexander Central High School, played collegiately at Wilkes Community College — a former rival of Catawba Valley before Wilkes ended its program — so he is aware of the history of CVCC baseball.

“From what I’ve witnessed, Catawba Valley Community College is always hunting greatness, and that’s something I want to be a part of,” Brian said.

Now closer his hometown, the Taylorsville native is excited about returning to his roots.

“Being back home is a good feeling,” Brian said. “Any time you can be close to your family and closest friends is nice. That will definitely help the transition back. I’m excited to catch up with everyone.”

Lackey is also excited about the opportunity to work alongside Rozzelle and Harvey.

“Getting the chance to coach next to coach Rozzelle and coach Harvey is an opportunity to learn from two of the best,” Brian said. “Coach Rozzelle and I built a relationship when I was coaching at Alexander and Watauga high schools as well as on the showcase circuit. He turned into someone who was willing to give me guidance throughout my career. Now I get to join him. That’s awesome.

“Being from here, I’ve obviously followed all of the Harvey family’s successes in baseball,” Brian added. “I’ve enjoyed seeing coach Harvey’s success translate from playing to coaching since he started at CVCC. I’m excited to be able to learn from these two.”

The Red Hawks have an extremely talented group of players heading into the 2021 campaign. and Lackey knows exactly what each of them can expect from him everyday.

“One thing that I can guarantee I’ll bring each day is energy,” he said. “I’m a very vocal coach who rides the energy bus every day. I believe if your players see you juiced up about practice, games, weights or anything else, they jump on that energy bus with you. That makes the ride fun. The opportunity to join a staff of this caliber is exciting. I’m humbled and honored that coach Rozzelle has faith in me and trusts me to assist in guiding the student-athletes at CVCC.”