Alexander Central and Watauga will renew an old rivalry this evening in Taylorsville. As has been the case the last several years, the stakes are high in a series led by ACHS 30-22.

Watauga ran the table in the Northwestern Conference in 2018 and finished the regular season 11-0. That included a 35-0 thumping of Alexander Central in Boone. It was a night to forget for Cougar fans. The Pioneers ended the season at 13-2 including a pair of playoff wins. This season, Coach Ryan Habich brings Watauga to town with a record of 5-1 including a 56-12 rout over South Caldwell last Friday in the conference opener. Look for Wataua to run it with quarterback Anderson Castle and tailback Jaiden Bond, they’ve combined for almost 1,500 yards and 19 touchdowns on the ground. They been a productive combination through the air as well, with Bond catching 8 passes for 237 yards and 3 more scores. 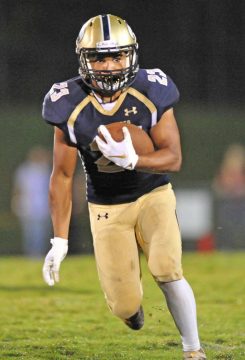 Alexander Central is coming off a bye-week with a non-league of 4-1. The only loss was a setback against Statesville in a game they led by 14 points late in the third quarter. Running is what the Blue and Gold do well. Steven Montgomery has rushed for 865 yards and 8 touchdowns, he’s gone over 100 in each game. The defense has emerged behind junior Ryheem Craig who leads the team with 33 tackles including 8 stops for loss. The secondary has intercepted 9 passes. The last time Watauga visited Alexander County was in 2017. The Cougars won a thriller 38-33. That win fueled AC to a conference title and a 10-2 season.

Tonight is homecoming at Glenn Wilson Field at Cougar Stadium. The kick is at 7:30. B86 Radio will carry all the action beginning at 6pm with a tribute to the 1969 Taylorsville High School Bears. 1969 was the final season for Taylorsville High. The Countdown to Cougar Kickoff begins at 6:30. Center Jaden Houston will be in the Senior Spotlight at halftime !

In other action this evening