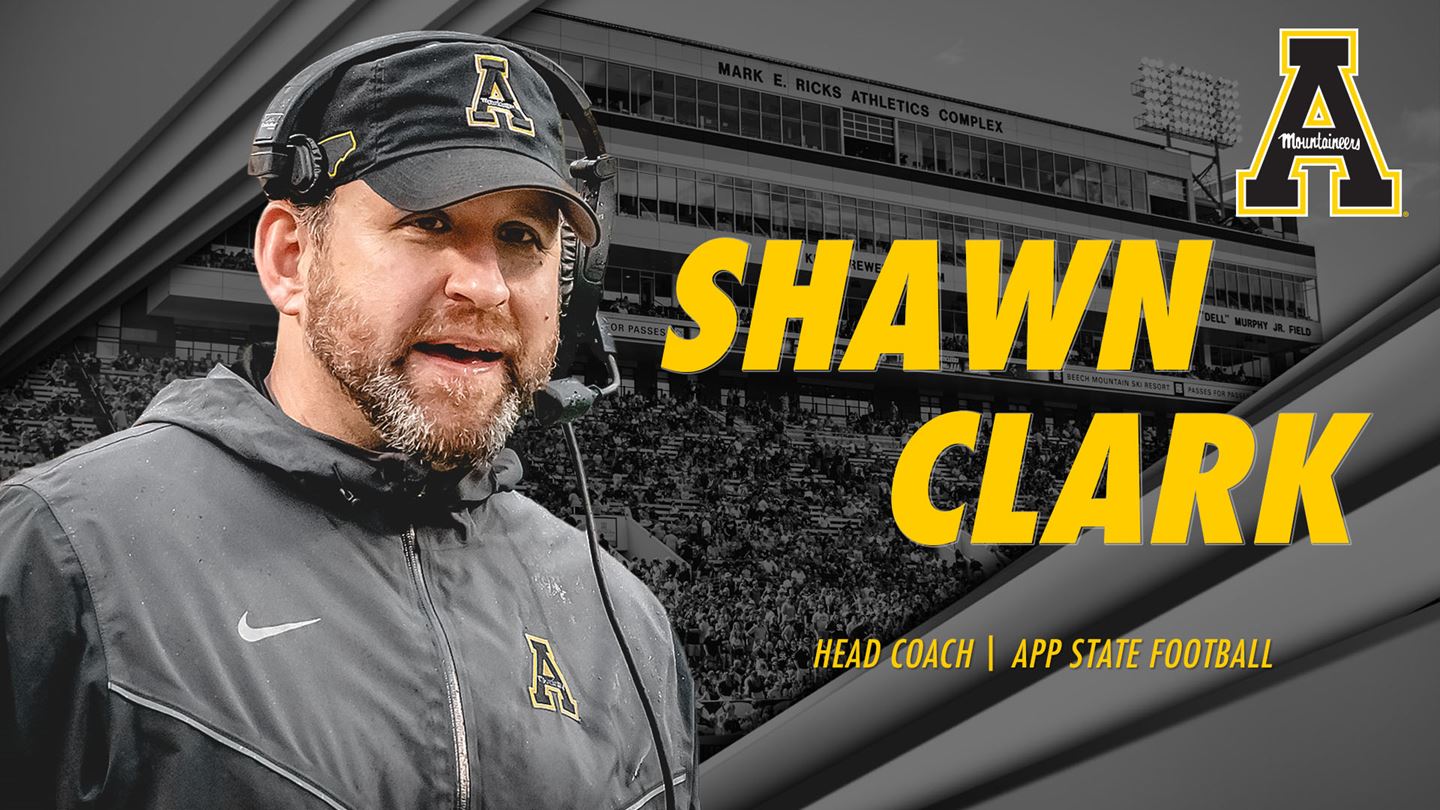 A champion as an Appalachian State player and coach, Shawn Clark has been chosen to lead App State’s championship football program.

Clark, 44, has agreed to become the 22nd head football coach in App State history. His five-year contract, which runs through the 2024 season, was approved Friday afternoon by Chancellor Sheri Everts and the Appalachian State University Board of Trustees and is subject to North Carolina Board of Governors approval.

Clark will be the head coach when the 20th-ranked Mountaineers (12-1) wrap up the 2019 season by facing UAB on Dec. 21 in the R+L Carriers New Orleans Bowl. He will be formally introduced today during a 4:30 news conference in Boone.

“I am thrilled to officially welcome Appalachian alumnus Shawn Clark as our new head football coach,” Everts said. “I appreciate his steadfast leadership and know we all look forward to his continued success with our history-making team.”

“It’s a great day to be a Mountaineer,” Director of Athletics Doug Gillin said. “We are thrilled to announce Shawn Clark as our new head coach. He’s been a great leader for us since the day he returned to his alma mater. He has experience at both Power Five and Group of Five schools and is highly respected among his peers, his players, on campus and in the community. His experience as a leader, play-caller and recruiter will help us to continue to raise our football program to new heights.”

Today, you can renew your App State season tickets and Yosef Club membership or purchase new seats for the 2020 season by clicking HERE, calling 828-262-2079 or visiting the App State Athletics ticket office, located at the Holmes Center.

Clark has helped lead record-setting runs to conference titles and bowl victories, not just at App State, where he played from 1994-98 and had served as an assistant since 2016, but also in four other leagues during his two decades of college coaching experience.

Working for championship-winning programs at Louisville and Eastern Kentucky before being part of a bowl win for Big Ten member Purdue and coaching at Kent State, Clark has been a vital part of App State’s historic success in the last four seasons.

Overseeing talented, hard-working offensive lines the entire time, he followed a December 2018 coaching change involving college teammate Scott Satterfield’s departure for Louisville by excelling as an aggressive offensive play-caller in a 45-13 bowl victory against Middle Tennessee. With valuable experience at his disposal, Clark was promoted to assistant head coach before the 2019 season with Eliah Drinkwitz in his first year as a college head coach.

In each of Clark’s four seasons coaching App State’s offensive line, with the Mountaineers earning four straight Sun Belt Conference titles while compiling a 42-10 record in that span, the line has ranked in the top 25 nationally in both rushing yards per game and fewest sacks allowed. The unit has been recognized by the Joe Moore Award as one of the nation’s top 15 offensive lines in each of the last two years, and all five starters on this year’s line have received All-Sun Belt Conference recognition.

An offensive lineman in college, Clark was a two-time All-American (1996 and 1998) and three-time all-conference selection (1995, 1996, 1998) for teams that went a combined 45-16 during his first five years in Boone. In fact, as a player during the 12-0 start in 1995 and a coach for the 2019 team that has set a single-season record for wins by an FBS program in the state of North Carolina, Clark has been part of the two App State teams to post 11 regular-season victories.

“This is the opportunity of a lifetime to be named the head football coach at my alma mater, the school that I love so much,” Clark said. “I would like to thank Chancellor Everts, the Board of Trustees and Doug Gillin for entrusting me with this great responsibility. I am excited to keep pushing our players to greatness on and off the field and to work with a great coaching staff to win championships. My family and I are grateful to stay in Boone and keep pushing this program to new heights.”

Clark graduated from App State with a bachelor’s degree in criminal justice in 1988 and earned a master’s degree in education from Louisville in 2003.

His wife, Jonelle, was a standout softball student-athlete at Eastern Kentucky and was inducted into EKU’s Athletics Hall of Fame in 2008. The Clarks have two children: a daughter, Giana, and a son, Braxton.