A man is in custody after an incident overnight that left a victim suffering a slash wound.

Around 11pm, Deputies with the Alexander County Sheriff’s Office responded to a location on Stony Point School Road in Stony Point. Officers located a victim who was bleeding from an injury in his neck area. The victim stated that the altercation occurred following a verbal disagreement. The victim and a witness on the scene advised that the suspect in the case had left the residence on foot. The injured victim was transported by Alexander County EMS to Iredell Memorial Hospital in Statesville. His injuries are not life threatening. 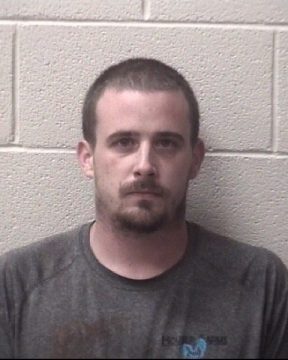 The North Carolina Highway Patrol was alerted and a trooper spotted a subject walking along Stony Point School Road. The suspect was identified as Vaughn Paul Mitchell III, age 29 of Maiden. When taken into custody, Vaughn was in possession of a knife, narcotics and drug paraphernalia, including marijuana and methamphetamine.

Mitchell was transported to the Alexander County Detention Center, where he was placed under a $134,000 bond and is scheduled to appear before a judge today in a first court appearance in Taylorsvlle.

Sheriff Chris Bowman would like to thank the North Carolina Highway Patrol for their assistance.