A ranking career lawman has retired from the Alexander County Sheriff’s Office. A retirement reception was held on Thursday, July 9, 2020, for Captain Chad Pennell, who has worked for the Sheriff’s Office since 1993.

Sheriff Chris Bowman congratulated Captain Pennell on his distinguished career and nearly 30 years of service to the community. Bowman said he brought well-wishes from retired Sheriffs Ray Warren and Hayden Bentley, who could not attend the gathering. 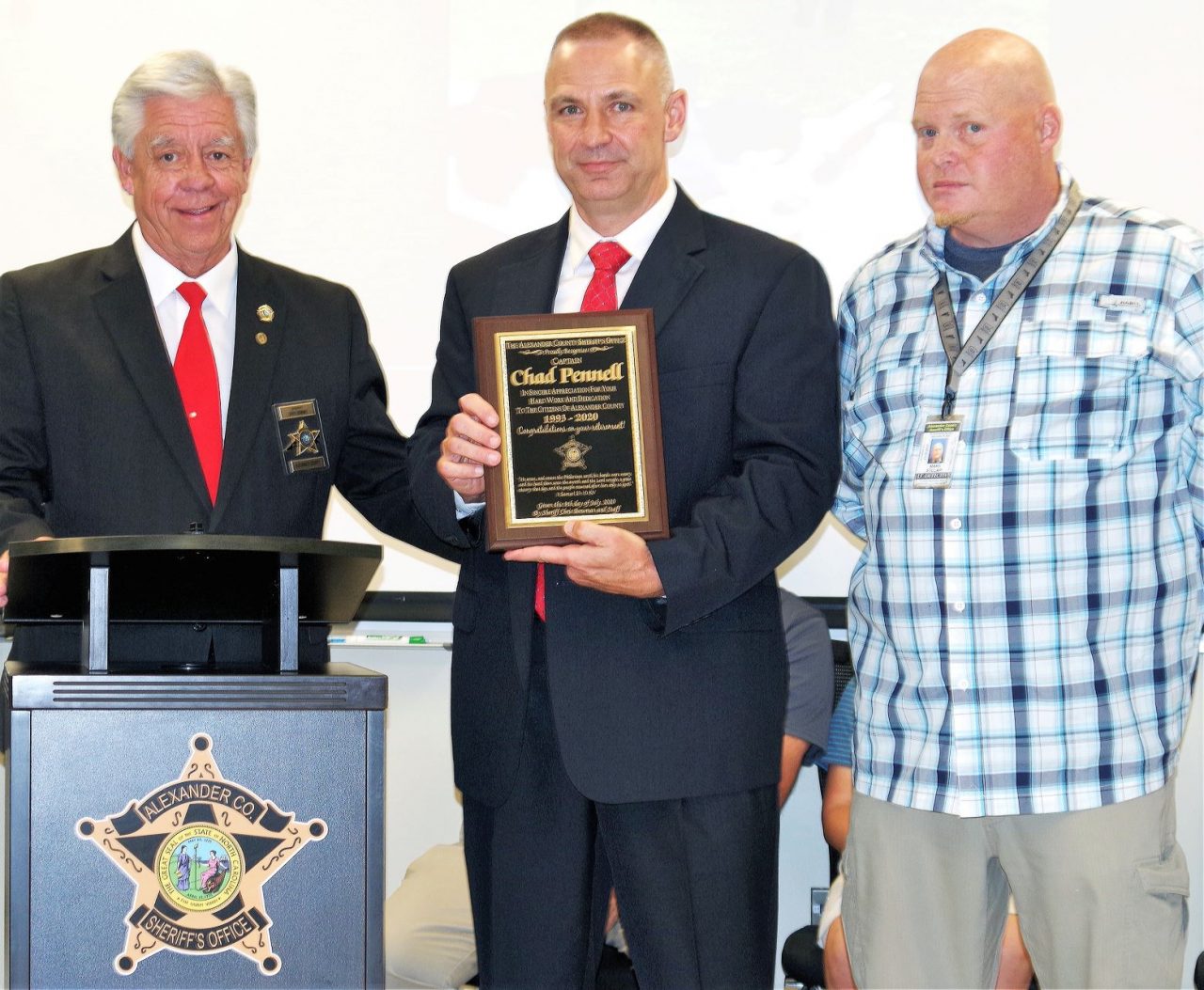 Sheriff Chris Bowman and Detective Mark St. Clair present a plaque to Chad Pennell in recognition of his many years of service

Alexander County Commissioners Ronnie Reese and Marty Pennell also attended and wished Captain Pennell all the best in his retirement.

Commissioner Reese stated, “Chad, you’re a good man. On behalf of the Alexander County Board of Commissioners and County Manager, I’d like to congratulate you on your retirement and express our appreciation for a job well done. It will be very difficult to replace you. Best wishes on the next chapter of your life.”

Pennell, the son of Dale and Dolly Pennell, is a resident of the Ellendale Community. In 1989, after graduating from Alexander Central High School, Pennell went into the U.S. Army, taking Basic Training and AIT training at Fort Sill, Oklahoma. He served in the United States Army from 1989-1995, where he was a Sergeant of Fire Support with two commendation medals. He has a two year degree in Criminal Justice from Wilkes Community College. 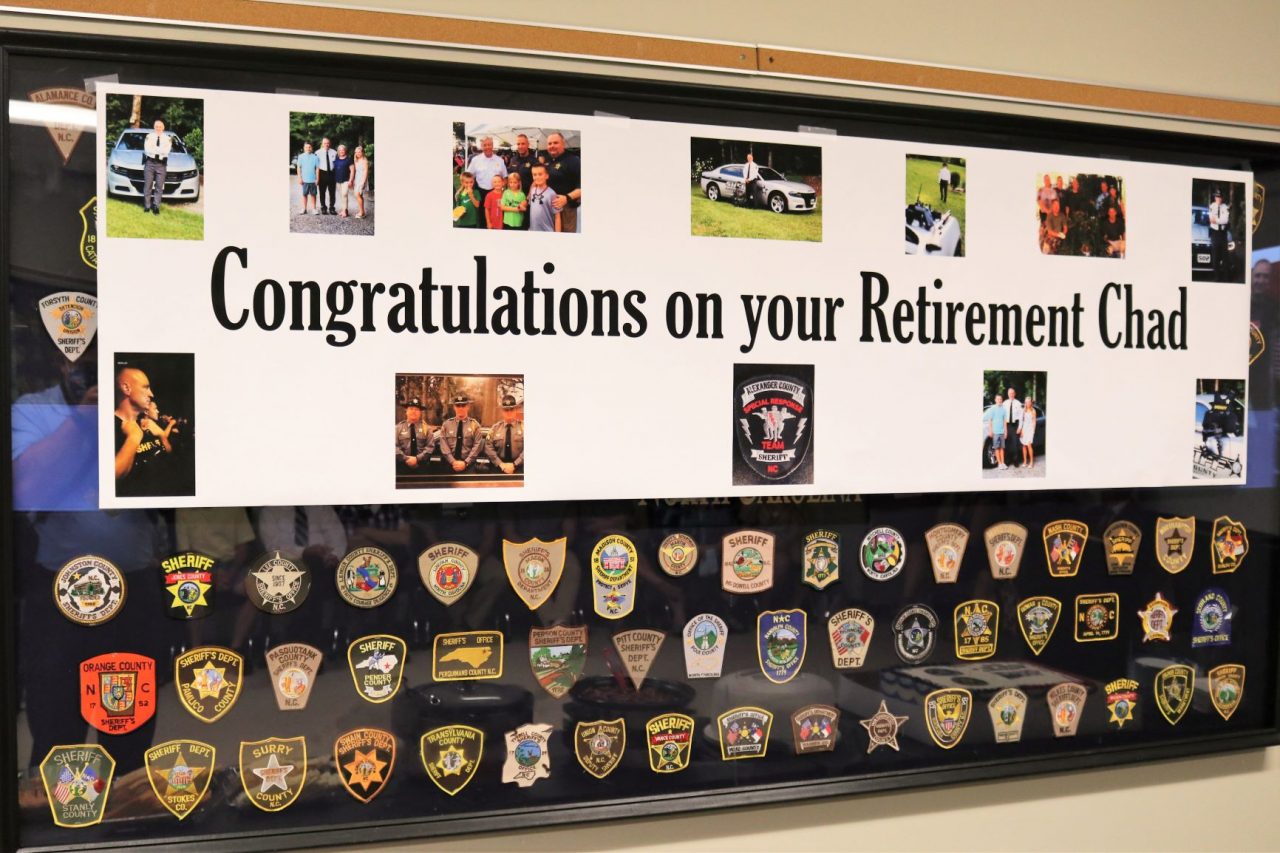 Captain Pennell was hired March 1, 1993, as a part-time School Resource Officer at East Alexander Junior High School. In February 1994, Pennell became a full-time deputy. During 1996-1997, he served as Patrol Shift Supervisor. In 1998, he was promoted to the Investigations Division, working sex crimes and drug crimes. 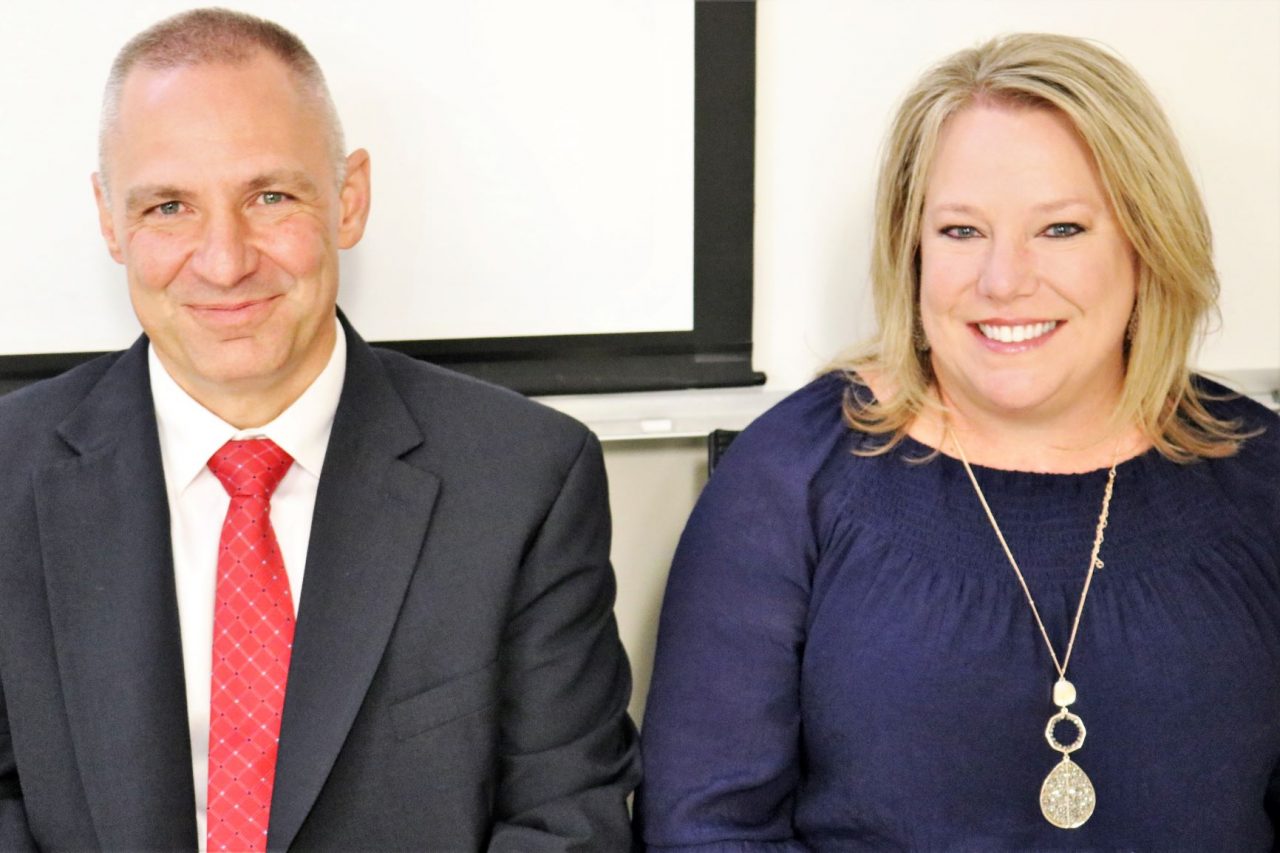 Chad, and his wife, Deanna

Captain Pennell was moved by the outpouring of support.
“My wife and my family have given so much for me to be able to do this job. I’m thankful today that I can walk out, instead of getting carried out. There’s a lot who couldn’t do that. I’m thankful for my family members who helped me get to this day,” Pennell said. “And I think of this family here [officers], that I was through a door, I knew they’d be right behind me. There’s some who gave me direction when I was so young I didn’t realize what I was doing. I’m thankful for all of them, for things that they’ve given me, showed me, and followed me in. When you get to be in a certain position, you’ve got to trust the people behind you, that if you ask them to do something, they’ll do it. They have, and I really appreciate that.”

“Chad’s a good one. We will miss him. We wish him the best in his future career,” Sheriff Bowman said.

Pennell has taken a job as an electrician with Crowe Electric Services as his next career.

Alexander County Government would like to express its sincere gratitude to Chad Pennell for his dedicated service, and wish him many years of success and happiness with his family and friends.