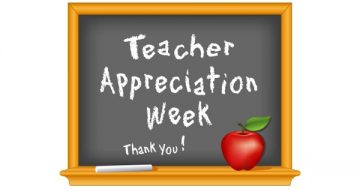 It’s National Teachers Day and it’s Teacher Appreciation Week ! Can’t blame my shortcomings on teachers, I had some good ones

1718: The city of New Orleans is founded

Sports: Playoff Tuesday in Taylorsville…AC Softball and Baseball both host 1st Round State Playoff Games today…East Baseball wins again…Watuaga will have one coach for both Men’s and women’s Hoops…Canes know their next foe…Rockets pull even with Warriors…Truex tames the Monster…Panthers cut a safety

The Prince and the Duchess are the proud parents of a baby boy. How would you like to be that kid?

On the other side of the childbirth spectrum, I read a story about a woman giving birth to a daughter while in jail. It happened in Florida. Good luck to that little girl, let’s hope life gets better

What? Also in Florida, an officer arrested a woman who was hiding a small alligator in her pants, no kidding !

Quote of the Day: “The only normal people are the ones you don’t know very well”…Joe Ancis