The award will be presented on Thursday, June 20, at the NCBA Annual Meeting being held at the Amherst Conference Center at Biltmore in Asheville.

The NCBA Citizen Lawyer Award was established in 2007 to “recognize lawyers who provide exemplary public service to their communities. Honorees include elected and appointed government officials, coaches, mentors and voluntary leaders of nonprofit, civic and community organizations.” 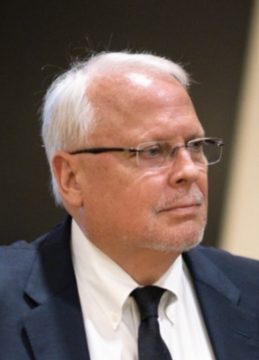 Harbinson is the senior partner of Harbinson, Brzykcy & Corbett LLP, Attorneys at Law with offices in Taylorsville and Statesville. His law offices engage in a general trial practice in the primary areas of criminal and traffic, custody and domestic, and personal injury and wrongful death cases. After graduating from Alexander Central High School in 1972, Harbinson attended the University of North Carolina at Chapel Hill as a Broyhill Industries Scholar. Joel graduated from UNC in 1977 with an A.B. degree and from the University of North Carolina at Chapel Hill School of Law in 1979 with a J.D. degree. In 1979, he began a solo practice in his hometown of Taylorsville.

Joel is the former President of the 22nd Judicial District Bar Association and is a current member of the N.C. Bar Association, the N.C. Advocates for Justice, and the Phi Delta Phi international legal fraternity. He has consistently received an “AV Preeminent” rating from Martindale-Hubbell, giving him the highest possible ranking by his fellow attorneys and judges in both competence and ethics.

On the local level, he is a co-founder and board member of the Bob Gryder Scholarship Foundation, Inc., which was incorporated in 1974 and was the first, of now many, local providers of annual scholarships to graduates of Alexander Central High School.

Since Joel’s younger son, Jarrett, is autistic, Joel has been active in many organizations promoting mental health in particular and health care in general. He has served on the Board of Directors of the N.C. Autism Society (1992-1996) and was appointed by then Governor Jim Hunt to serve on the Governor’s Advocacy Council for Persons with Disabilities (1997-1999). Joel is the former Chairman of the Board of Trustees of Alexander Community Hospital (1993-1997).

In 2018, Harbinson was selected by NC Lawyers Weekly as one of its 2018 North Carolina “Leaders in the Law.” NC Lawyers Weekly states “these honorees represent the most influential individuals within our state’s legal community; those who have gone above and beyond in their profession and in their community.”

For nearly forty years, Harbinson has devoted much of his practice to representing those who qualify for court-appointed counsel in serious felony criminal cases. Over his career, he has successfully handled at least a dozen jury trials representing indigent defendants of color charged with sexual offenses, none of which ended in convictions. Consequently, the North Carolina Advocates for Justice asked him to chair a seminar in October 2017 at their headquarters in Raleigh entitled “Becoming Atticus Finch — Representing the Wrongfully Accused in Sexual Assault Cases.”

Joel is married to Connie Harbinson and has two sons, Justin and Jarrett, a step-daughter, Alexandria Corbett, and a grandson, Hudson Corbett.

The Harbinsons reside in the Bethlehem community of Alexander County.